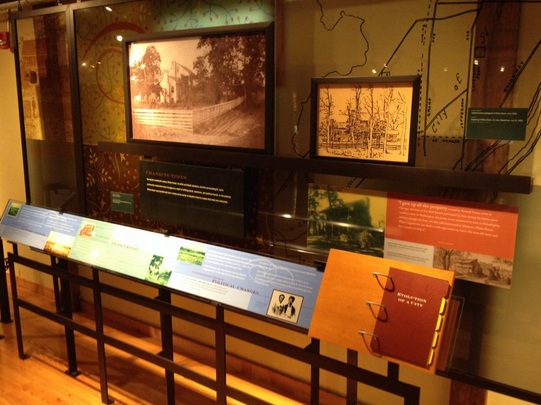 The turn of Spring is always an exciting time at work. The weather starts improving, the nearby bike trail teems with runners, walkers, and bikers, and our attendance numbers go way up. It’s a great time of the year for interpreters to roll out new ideas and programs while helping visitors make meaningful connections about history, nature, and themselves. Most folks I interact with during our busy season usually say nice things to me and come away with a positive experience, but there are occasional moments when visitors take a more critical perspective about their experiences. One such moment occurred this weekend.

A visitor came to the park and browsed our museum for about ten minutes. The visitor returned to the visitor’s center desk and asked about the last time the museum had been “updated.” The museum is still relatively new, having been completed in 2007, so another ranger and I said that it had not been updated for that reason. The visitor then responded by saying, “your museum’s content is inflammatory. It says that racism and sexism are still prevalent today and I find that pretty provocative. I grew up during a time when those things were actually prevalent, and it’s not the same today! You have visitors from other countries who visit this park. Is that what you want to be telling them about our country?”

The visitor did not yell these things at us, but they were said in a manner that was very aggressive. It’s the sort of moment when your stomach turns during an uncomfortable situation and you are unsure of how to ease the tension in the room.

I responded in the best way I could while also proceeding with a great deal of caution. I stated that our museum is an interpretive one – a museum where arguments are made about the past and connections are made to present-day issues. Not everyone who visits this sort of museum will agree with the exhibit text, the content on display, or the arguments made within its walls. And, in an effort to acknowledge this visitor’s comments and show that I was taking them seriously, I added that there was probably room to revise the text in a way that was more cautious about contemporary issues. That seemed to do the job; the visitor went on a tour, said nothing else about the museum, and thanked us for a nice visit.

(For the record, I’ve walked through and read the text in our museum probably hundreds of times. As far as I know there is no exhibit that makes the claim that “racism and sexism are still prevalent,” although the museum does show visitors the virulent racism and sexism of Ulysses S. Grant’s time and it challenges them to think about our own shortcomings with these issues today. I think that is a completely appropriate and necessary position for the museum to take).

There are a couple takeaways I got from this interaction. One is that for all of the talk I hear about avoiding politics when talking about history at work, it is an undeniable fact that any museum exhibit that connects historic issues to contemporary society is inherently political. That doesn’t mean the content under discussion is necessarily “liberal,” “conservative,” or what have you, but public historians and museum practitioners should not be surprised when our interpretations provoke critical feedback that questions the arguments we’ve made. There’s a fine line between what we consider the past and what we consider the present. And there’s a fine line between “connecting history to the present” and “using history to make a political argument about the present.” The precise moment in which history crosses into advocacy is a matter of interpretation, and visitors to cultural sites will make those interpretations whether or not the content on display was intended to be political or not.

I think acknowledging that museums are political is a good thing, however. Obviously I would like for visitor critiques to be conveyed in a constructive and polite manner, but it’s good to see and hear visitors being provoked and talking about the issues a cultural site discusses. One can hope that this person went home and decided to read more about racism and sexism in society today. Who knows. If I could go back in time I might have tried to facilitate a short dialogue and challenged that visitor to further explain why they took the position they did and what they think we could do to improve the exhibit they took issue with.

Another challenge with this interaction is envisioning what history museums today would look like if they took out all connections to the present or if they tried arguing that racism and sexism are things of the past. I just don’t think that sort of interpretation is honest or accurate. Maybe we shouldn’t argue to international audiences that racism and sexism are prevalent in the United States, but isn’t it just as bad to say that we all love and get along with each other? Who’s really going to believe that? And with regards to racism in the U.S., what would it say about a museum like ours–a mere thirty minutes away from the now-infamous Ferguson, Missouri–to make arguments along these lines? Nowadays we might have fewer people who engage in blatant acts of individual racism, but that doesn’t mean that we have solved systematic racism today (or individual racism, of course).

In this era of 24-hour news cycles, partisan clickbait, and social media’s role in perpetuating confirmation bias, I believe museums offer an alternative space to check our prior assumptions and participate in meaningful reflection and dialogue. I’m not sure how to measure the “success” of this visitor’s particular experience and whether our museum achieved the goals of reflection and dialogue, but it was certainly an interesting moment for my own personal reflection as a public historian.

Historian and musician on a perpetual mission to find the next great read. View all posts by Nick Sacco